Microbiology deals with diseases caused by infectious agents such as bacteria, viruses, fungi and parasites. Microbiologists have roles both in the laboratory and directly in patient care. Microbiology is often incorrectly classed as the study of germs or of bacteria. While some microbiologists may specifically study viruses, also called virology, or bacteria, also called bacteriology, microbiology encompasses the whole of studying microscopic organisms. This includes the study of bacteria, protozoa, fungi, some types of algae, and often viruses.

Microbiology is the study of microscopic, unicellular, and cell-cluster organisms. This includes eukaryotes such as fungi and protists and prokaryotes. Viruses and prions, though are not living organisms are also studied in Microbiology. Application of microbiology has given medicine its greatest successes in the diagnostic, prevention and cure of disease. Clinical microbiology is the tool in clinicians hand to detect the type of organism causing the disease.

This helps in deciding the antibiotic treatment for the patient. We perform all Clinical Microbiological tests on all the specimens. The tests involves Culture, staining, Sensitivity testing and biochemical’s. 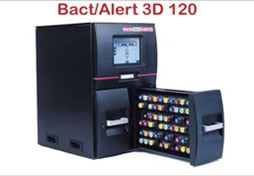 Time-proven and most accurate rapid detection system based on colorimetric principle.It ensures the availability of results for routine organisms in as short a time span of only 8 hours and for Tuberculosis as early as 10 days.

The BacT/ALERT® 3D is the most automated & widely used compact modular & flexible system capable of performing blood culture, body fluid culture and mycobacterial of both respiratory & non-respiratory specimen testing on a single platform.

With an extensive database capable of identifying over 330 species of microorganisms, the VITEK 2 provides same-day identification for 98% of routine organisms with a single system. 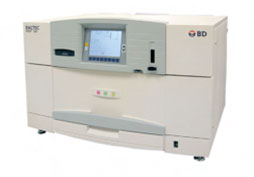 The BACTEC MGIT 320 system is the mycobacteria testing instrument from Becton Dickinson (BD). It is an automated system that exploits the fluorescence of anoxygen sensor to detect growth of mycobacteria in culture. It is specially designed to accommodate Mycobacteria Growth Indicator Tube (MGIT) and incubate them at 37°C. The instrument scans the MGIT every 60 minutes for increased fluorescence.

Analysis of the fluorescence is used to determine if the tube is instrument positive; i.e., the test sample contains viable organisms. An instrument-positive tube contains approximately 105 to 106 colony-forming units per milliliter (CFU/mL). Culture tubes which remain negative for a minimum of 42 days (up to 56 days) and which show no visible signs of positivity are removed from the instrument as negatives and discarded.

Its usefulness has been evaluated in the scientific literature. It is considered as the gold standard for TB culture and sensitivity.